We got a Vitamix.

We’d been using our Oster blender once or twice a day, and after nearly a year of this kind of heavy use, the motor was clearly dying a slow and awful death.  I wanted an upgrade, something that wouldn’t need to be replaced annually.  The Vitamix’s capabilities make me swoon, and after enumerating them ad nauseam to the Midwestern Gentleman, he grew enamored of the idea of “One [Appliance] to Rule Them All,” so to speak.  However, while the whole-foods foodie in me was busy swooning over the Vitamix, the frugal Yankee in me was cringing in horror at the cost of this single countertop appliance.  Let’s just say the Vitamix costs about the same as the new kitchen range we recently installed.

I hemmed and hawed.  I interrogated friends who own the Vitamix.  I polled friends who own various other choppers/blenders.  Finally, I turned to Consumer Reports.  They gave the Vitamix their highest rating overall, but a close second was the Ninja Master Prep.  As it turned out, one of my coworkers had a disused, virtually brand-new Ninja languishing in her closet, so she offered to lend it to me for a test run.  For three weeks, I chopped pestos and salsas, pureed smoothies, and even made peanut butter.  The Ninja worked fine.  Then I read a review online written by a woman who had bought the Ninja and lived happily with it until she visited a friend who owns a Vitamix.  She then bought a Vitamix and has never looked back.

My indecision lasted nearly a year, during which time I was squirreling away every gift card I received for the wedding, for my birthday, for Christmas… and one day, I tallied things up and realized that the model I wanted (the Pro 300) would cost me about $50 out of my own pocket.  SOLD.  It’s been just a couple of weeks, but I haven’t had a moment of regret.  So, what have I been using my new Vitamix for?

I’ve made the smoothest green smoothies ever.  No flecks of spinach or kale to chew!  I’ve also rocked the Vitamix like a juicer, straining fruit and vegetable blends through cheesecloth. 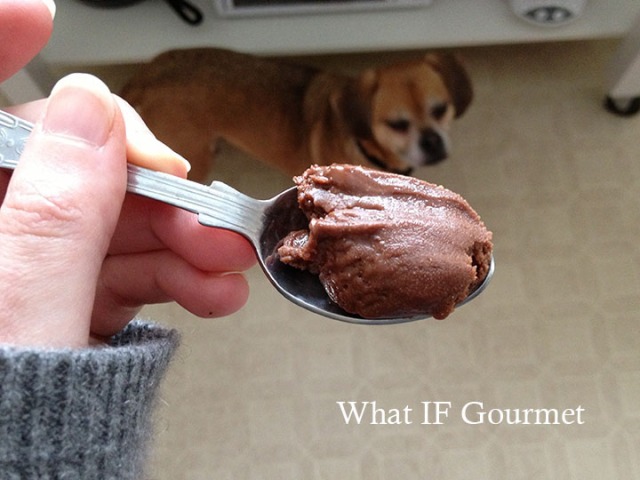 Baxter comes running, with hope in his eyes, every time I open the jar of chocolate cashew butter.

I’ve made a homemade version of Nutella using dry roasted cashews, cocoa powder, and plum oil.  It came out perfectly creamy, but so thick that it was more like spoon fudge than a spread.  I’ll be tweaking that recipe before posting it. 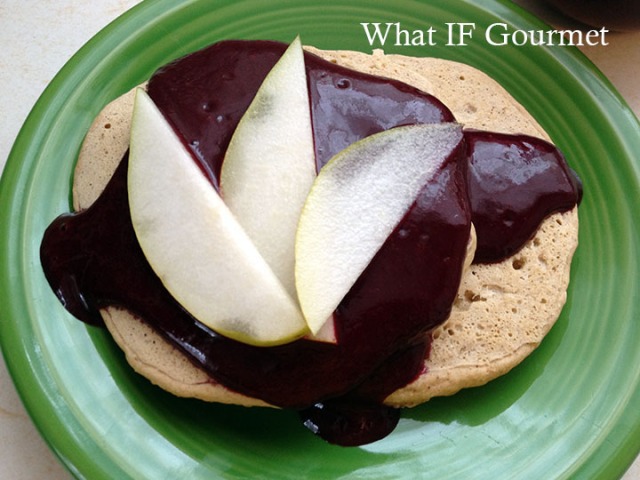 I’ve made warm berry sauce for pancakes.  The Vitamix’s blades spin so fast that they heat by friction if you let the machine run for a couple of minutes instead of just a few seconds.  Although I loaded this sauce with blackberries, strawberries, and raspberries, the Vitamix obliterated the gritty seeds, resulting in a seductively silky sauce.

Finally, here is a recipe for a garlicky beet dip that is tailored to the Vitamix, but would also work in any food processor.

about 4 cups of cannelini beans, canned or cooked

Cut the peeled beets in half, and place in a microwave-safe bowl.  Add a few tablespoons of water for steam, cover, and cook on HIGH for about 6 minutes, until tender when pierced with a fork.  Put the steamed beets into a Vitamix canister or food processor.  Add the remaining ingredients.  If using canned beans, drain and rinse them well before adding them to the blender.

If using a food processor, then pulse or process until smooth.  If using a Vitamix blender, start on variable 1 and slowly turn the speed up to variable 7.  Blend for 30 to 40 seconds, using the tamper if necessary, until dip is smooth.

Store in an airtight container in the refrigerator for up to a week.  Makes about 3 cups of dip.